What a summer! Wait it’s back to school already?

Well it’s been a very, very long time since I have written in Mateo’s Story. We have done a lot this Summer and the kids have already put in two weeks of school! That is just crazy right? Remember when Summer was like 3 months long and we were actually excited to get back to school? Two months of Summer just isn’t enough!

I am truly amazed and inspired by Mateo. He has grown up so much in the past year, even in the past few months. He has physically grown, I have bought him all new clothes and shoes. He picked out two pairs of Vans that are covered in his two favorite foods, pepperoni pizza and cheeseburgers.  I think he’s pretty much the coolest kid ever.

He has also really matured over the past few months. He has become more independent and now makes himself a snack when he’s hungry which is ALWAYS peanut butter and honey in a tortilla and a chocolate milk to drink. He has been great about doing his homework so far and seems to really enjoy school this year. Which is the complete opposite of the beginning of last year, thank goodness for that! He really likes his new teacher and is lucky enough to still have all of this close friends in class with him again this year.

As I watch him grow up I feel so proud of him. I always think about that sweet little three year old boy starting preschool with the other kids his age and he hardly had any words. Now he independently marches himself all the way across school to the gym every morning. He doesn’t want an escort any more from his parents or even his sister like he had last year. This year he does it alone.

With each year as he gains a little more independence, a little more courage, and I begin to think about his future. I wonder if maybe he will go to college, maybe he will be on his own one day. But I try not to think too far ahead, it’s always been one day at a time. One behavior at a time, one challenge at a time, one hurdle at a time. The future is not a place that parents with children of Autism like to visit. It is filled with too many unknowns, too much worry, too much stress. I like to focus on the growth, the accomplishments and the present. 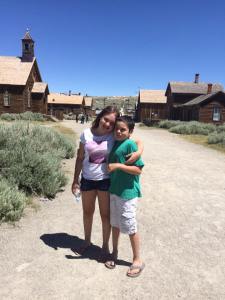 I feel like I need to summarize our summer and what Mateo enjoyed the most. He would tell you the State Fair. That’s always his answer, which cracks me up, maybe it’s because it’s always the last hurrah before they go back to school. It was over 100 degrees that day and we were all sweating on hot asphalt and carnival rides, all of us were pretty miserable, but he will still tell you it was the best thing he did all summer. Maybe he forgets about the fun he had at Yosemite when we hiked all the way to the falls and the excitement of walking through a granite cave. Or maybe he forgot about the ghost town that we visited that how he enjoyed peaking into every dusty window to see what treasures were left behind. He also learned to swim, dive and jump of the diving board this summer. He has mastered his fear of putting his face in the water and taken on jumping right in! We went camping and to the beach with a huge group of friends. He had sleepovers, Pokemon Go adventures, Minecraft for hours on end and lots of time with his sister, dogs, family and friends. But I guess nothing tops that crazy hot day at the Fair! Well we did get to pet a Wallaby there, that is hard to beat!

This entry was posted in Family, Friends, It's Autism, Minecraft. Bookmark the permalink.

2 Responses to What a summer! Wait it’s back to school already?